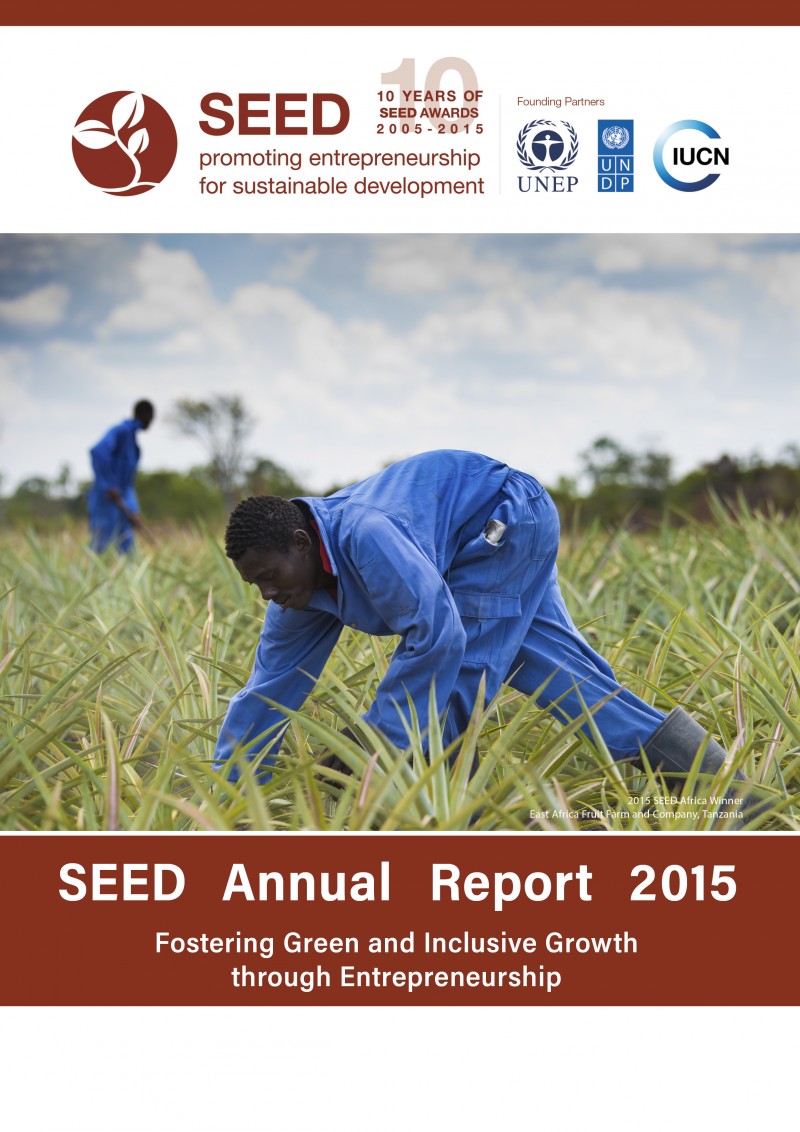 2015 was also a special year for SEED, in which the partnership celebrated 10 Years of SEED Awards, and took the opportunity to take stock and publish a comprehensive Flagship Report that looked not only on the success of former SEED Winners and the lessons learnt over those 10 Years of SEED Awards, but also on opportunities that could help increase the impact of locally-driven social and environmental entrepreneurship in the years to come.

In 2015, 27 trailblazing eco-enterprises were recognised at the 2015 SEED Africa Symposium in Nairobi for their success in bringing social and environmental benefits to local communities; over 200 people were trained on eco-entrepreneurship; over 20 case studies and video stories about inspiring eco-enterprises were published; the 2014 newly developed BDS+ methodology was piloted in another country in Southern Africa; and the SEED Deal Ready Programme was launched to help increase the flow of investment capital to financially advanced SEED Winners  in need of matchmaking with interested investors. Furthermore over 800 entrepreneurs, policy-makers, businesses, civil society and support institutions from over 30 countries came together at SEED events.

These and more of SEED’s achievements in 2015 are captured in the 2015 SEED Annual Report.

Allison became the SEED Executive Director in 2015. She brings with her over fifteen years of experience in the space of climate change mitigation, most recently as Director of Zennström Philanthropies. Allison holds a BSFS in Economics from the Edmund A Walsh School of Foreign Service at Georgetown University, and an MSc in the History of Economic Development from the London School of Economics. She is based in the UK.

Marion Müller vom Berge has supported SEED since 2015. As the Head of Finance, Marion is responsible for the overall budget for numerous activities of the SEED programmes. In her position as Senior Manager at SEED's Hosting Partner adelphi research gGmbH Marion mainly focuses on budget management for multi-year funding initiatives.

Marion studied political science at the Ludwig-Maximilians-Universität München focusing on political philosophy and economic ethics. In addition, Marion has many years of professional experience in moderation, citizen participation and event management.

Rainer Agster has supported SEED since 2006. He serves as Director of Operations at SEED and oversees all operations within SEED's Hosting Partner adelphi research, providing input to the strategic development of SEED. Rainer joined adelphi in 2002 as a Senior Project Manager and is now adelphi's Director of Private Sector Cooperation. His focus is on social and environmental entrepreneurship, energy efficiency, green finance and adaptation to climate change.

Rainer has experience in the development, implementation and evaluation of sustainable development projects for national and international clients (EuropeAID, DG Energy and Transport, DG Education and Culture, UNFCCC, UNEP as well as Austrian, Chinese, German and Indian ministries, GIZ and KfW). Rainer graduated from the University of Applied Science Bremen in an International Study Programme for Environmental Engineering and has a Masters degree in Business Administration with a focus on sustainability management from the University of Leuphana in Lueneburg. He also studied one year at the University of New South Wales in Sydney, Australia.